For the book club this month, we're reading Circe, a novel by Madeline Miller, based on one of the lesser goddesses of Greek mythology.  A textile artist who wove on a loom built by the legendary craftsman, Daedalus, Circe is best known as the witch who lured sailors to her shores and turned them into swine. In more

I always encourage you to swatch before jumping into a project, and with the Custom Fit program, you have to swatch before you can get your pattern.  I know it seems like they're making you finish your vegetables before you can have ice cream, but it's not meant to be mean.  The truth is that it's impossible to generate a Custom Fit pattern without a swatch because the patterns are all generated specifically for your measurements and your swatch.

Since the swatch is such an essential part of the Custom Fit Program, I put together a swatch guide for a nice big swatch that's easy to measure.  Give it a try - I'd love to hear what you think.

I look forward to seeing you swatching in the shop, and around the table - you are always welcome here!

Back to 8 September 2015 Newsletter

The SwirlAlong in Leonardtown was quite lively.  Connie and Jeannie both cast on and were able to join in the round.  Sigrid swatched, and Shelly got ready to swatch.  Althea brought in two swatches she had worked so that she could decide which needle size was right for her project.  She had worked one on size 6 needles, and the other on size 4

Here are the two swatches right off the needles.  The swatch on the left was done on size 6 needles; the one on the right, size 4.

You may be at this exact spot with your Swirl.  It would be tempting to simply measure the gauge here, but it would only give you a piece of the picture.  So much of a Swirl depends on the blocking, and your taste in fabric.  Sandra McIver gives details on this point in her blog here.  Following Sandra's lead, I got out the blocking board and we pinned the two swatches into 8x8 squares.  First the swatch from size 6 needles.

As we pinned this swatch, it needed no stretching to get to 8 inches across.  In fact, I felt as if I needed to smoosh it into its 8" boundary a bit, even with stretching the length to 8 inches.  All pinned out, it looks nice, but really just a tad droopy.

The size 4 needle swatch needed a little coaxing to reach 8" in width, but it wasn't a fight.  Same with getting it to 8" in length.  Pinned out, it showed the structure of the alternating merino and Kidsilk Haze welts.

Blocked side by side

Althea and I discussed the possibility of doing another swatch on size 5 needles but she decided that she was going with the size 4 needles.  I think that's a good decision, and here's why:

I had to rip out my swatch Friday as I had not been paying attention and had done the wrong number of rows in my welts.  Alas...

Several of our La Plata ladies are in love with a classic sweater by Sally Melville from her book, The Purl Stitch called the Simple Cardigan. I know, not a glamorous or exciting name, but like everything in Sally Melville's books, it is exactly the kind of thing you want in your wardrobe.  Very wearable and comfortable, it's a garment that fits into your life and makes you wonder what you ever wore before you knit it.  Here it is in blue. 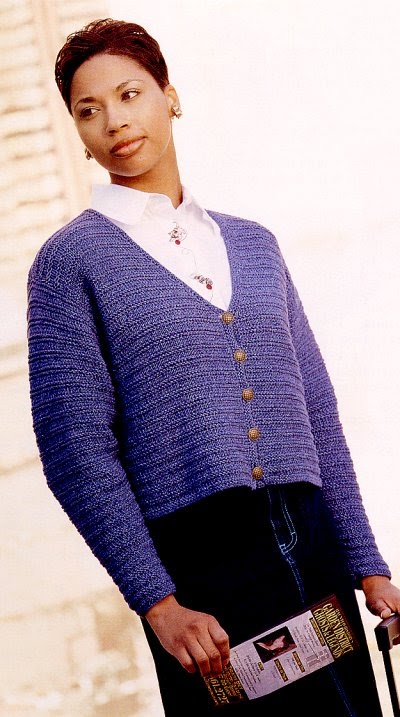 This sweater's simple styling is enhanced by a beautiful pattern stitch that's easy to do and makes a wonderfully plushy fabric.  Lynne swatched the pattern (actually the entire left front in miniature), in gorgeous Aurora 8.

The fabric is so beautiful and plushy, it made me remember why this is one of my favorite yarns.  I love the way the twist of this yarn makes even plain stockinette look interesting.