Add description, images, menus and links to your mega menu

A column with no settings can be used as a spacer

Link to your collections, sales and even external links

Add up to five columns

I finished my Eastscarf last week.  The pattern called for you to work the lovely leafy lace section over the first 100 or so rows at the beginning and then work the remainder of the scarf in simple repeat on the 16 center stitches.  I worked the 100 rows of the pattern (which took almost exactly one skein of gorgeous Inca Gold), and several repeats of the boring part when I realized that the boring part was not going to be in my future.
Don't get me wrong, I enjoy mindless knitting as much as the next guy, but this boring part was just different enough to require that I carry the pattern with me (yes, I know, lots of you can keep a 30-row lace repeat in your head, but my brain is already too full of other details on kid schedules and such to remember).  So I decided to cast on again with a new skein and worked the 100 row pattern over again.  My thought was to have a symmetrical scarf with an attractive leaf motif at each end.  I was going to graft the two halves together in the center.  Here's how it looks.  I like it. 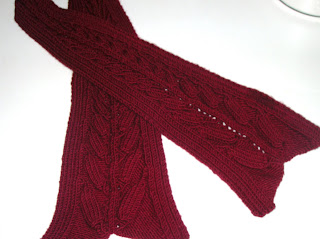 Here is a close-up of the center join.  You will notice that the scarf is NOT grafted.  That is not to say that I didn't try to graft it.  If you'd been in La Plata last Thursday, you would have seen my valiant attempt at grafting 2x2 ribbing, reverse stockinette and yarn-overs to one another.  After about an hour, I decided that the return on investment for a grafted join was way too low, so I bound off both ends and seamed them.  Not bad, and that part took less than 15 minutes.